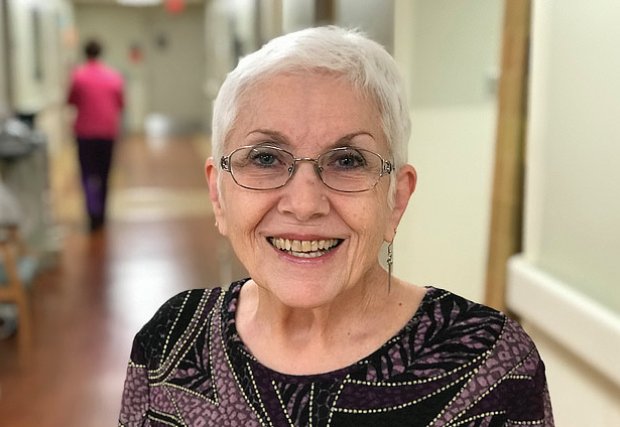 Seventy-year-old Rosella Kliewer is about one year out from her lymphoma diagnosis and is happily feeling stronger and better after receiving treatment at St. Mary’s Cancer Center. “If you’re going to get better, you need to put yourself in a positive place,” she says. “They helped me do that.”

She explains that the first sign something was wrong began with swelling in her neck, which led to difficulty breathing and swallowing. A CT scan revealed that she had cancer in her neck and chest, and her treatment immediately began. She spent six days in inpatient care at St. Mary’s, where she had a chest tube inserted to drain the fluid that was contributing to her symptoms.

Once the swelling was relieved, that was a turning point, she says. “I thought, I can do this. The care I received at St. Mary’s was just amazing.”

Shortly after that, she began chemotherapy at St. Mary’s Cancer Center. This entailed six treatments every three weeks over a period of several months. "They were always professional but also very kind,” she says. “They kind of became my family.”

She recalls how one of the oncology nurses encouraged her to do as much as she could tolerate throughout her treatment. At first, just going to the grocery store was challenging, but later she joined a tai chi class, which has helped improve her strength and confidence.

She’d moved back to Enid from San Antonio, Texas, just months before her diagnosis to be closer to her brother and sister. Today, she is grateful to be able to spend more time with her family and thankful for the support she received at St. Mary’s. Whether she was talking with one of the staff members, having lunch or just watching TV with a blanket, they made her feel comfortable. “I would definitely recommend St. Mary’s Cancer Center to anyone who needs treatment,” she says.

The Cancer Center at St. Mary’s provides a comprehensive range of services, including: diagnosis and consultation; medical oncology and hematology; personalized treatment plans; and outpatient oncology services, including infusions, transfusions, chemotherapy and bone marrow biopsies. Plans are underway for a new Cancer Center location across the street from the hospital in Parkview Tower by the end of the year.

Learn more about The Cancer Center at St. Mary's >