Living to the Fullest with a Caring Team for Support

Amber Williams describes her 9-year-old son, Cory, as a sweet, happy, ornery and active kid who is full of life, smiles and giggles, and loves sports. It was difficult for her to watch her son struggle for months with periods of fatigue, weakness, rash and joint pain.

“He was more sick than normal; he stayed sick longer and appeared to get tired easily,” reflects Amber. “Some days he would just lay down on the floor and want to sleep.”

Amber took her son to their family physician, Emily Cooper, MD, to see what might be going on. “We did a workup including an autoimmune panel and sugar check, and it all came back normal at that time,” says Dr. Cooper. “The rash and joint pain improved so we thought it could have been viral and encouraged his mother to call if it recurred.”

Three months later, Cory started becoming excessively thirsty and was frequently urinating. His parents became very concerned and knew something was not right. “I didn’t know what was wrong, but I knew whatever it was, it wasn’t normal,” says Amber. 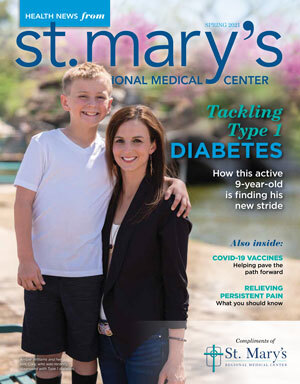 At the doctor’s office, Cory was tested for a urinary tract infection and the results showed the glucose in his urine was high. “They did a finger stick on Cory and the glucometer was unable to register his blood glucose level because his blood sugar was too high for interpretation. We were then sent directly to St. Mary’s Emergency Department,” Amber recalls. “Cory was really sick.”

Cory was preliminarily diagnosed by the ER physician with Type 1 diabetes and was admitted to the hospital for three days. “Type 1 diabetes is a condition in which the body’s immune system attacks and destroys the cells that produce insulin,” explains Dr. Cooper. Cory describes it as, “My body doesn’t produce insulin anymore. It is not fun and it’s really a pain.”

During Cory’s hospitalization, the family met with a nurse and a pharmacist, who explained how to administer insulin and how it works. Also, a dietitian, Pam Baggett, spent hours teaching them how to count carbs and calculate insulin dosages.

“I had never counted a carbohydrate or anything in my life, it was all foreign to me,” says Amber. “A diabetes diagnosis literally changes a patient’s life – their meals, portions, snacks and thinking about everything they put into their mouth,” says Baggett, who provides individualized education for newly diagnosed patients.

After Cory’s discharge from the hospital, Dr. Cooper started him on insulin treatment and referred him to a pediatric endocrinologist.

Living Life with a Chronic Condition

Now, a year later, Cory attends school, is active in sports and uses a continuous glucose monitor (Dexcom G6®) to continuously monitor blood sugars. “He must perform finger sticks and take insulin throughout the day,” says Amber. “Cory has to count every carbohydrate he eats and then calculate how much insulin he needs, which is based on how many carbs he is eating.” During sports, adjustments are made to help him feel his best when on the field or court.

A vital part of managing the diabetes is teaching how to manage the stress of it all. “If he sees me fall apart, what will that teach him? He never complains, so I won’t either. Diabetes hasn’t slowed him down. He has taken his diagnosis, accepted it and lives life to the fullest,” concludes Amber.

If you have concerns about diabetes or another health issue, talk with your doctor.