Rising to the Challenge of COVID-19 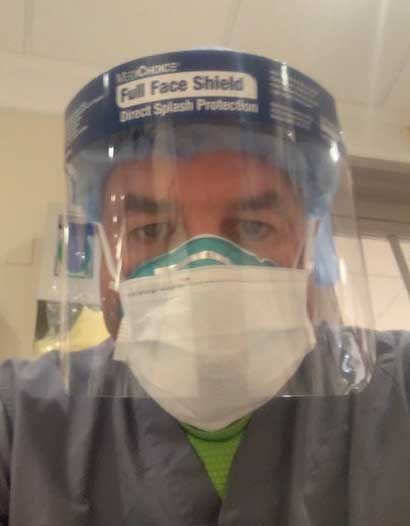 Healthcare workers in Enid and around the world are taking extraordinary measures to help save lives in the face of the COVID-19 pandemic. In April, when New York City was at the center of the nation’s battle against the deadly virus, C.B. Ingham, Chief Certified Registered Nurse Anesthetist at St. Mary’s Regional Medical Center, traveled to a hospital in Manhattan to help.

The volunteer trip was put together by Envision Physician Services, which is Ingham’s employer through a contract with St. Mary’s. Making the decision to go was difficult, but Ingham said he was available and that his three children are all grown and doing well, so his family situation gave him the flexibility to travel. “I did it because it was the right thing to do,” he said.

All Hands on Deck

He spent two weeks in New York, where Ingham said it was “all hands on deck” to do what needed to be done. “A small percentage of a huge population was still an overwhelming number for the hospital to take care of all at once,” he said.

He and members of his team helped with many different tasks, including intubating patients who needed a breathing tube for respiratory support. He also helped the nurses take care of the drips and ventilators, and put in central lines and arterial lines, which can be used for anesthesia and other purposes.

“With anesthesia, we’re kind of the last people who talk to patients before they go to sleep,” Ingham said. They know “we’re there for them and will be watching over them.” This took on added meaning, as visitation restrictions kept loves ones from being in the COVID areas. “We were the families for these patients,” Ingham said.

Shifts were busy and intense, and moments outside where Ingham could shed some of the heavy protective equipment were humbling, as New Yorkers showed their support. He recalls the cheers of the Fire Department and the lights in Times Square thanking healthcare workers. He also remembers people in apartment buildings opening their windows to bang on pots and pans at shift changes, and a teenager riding by on a bike and saying thank you. “It kind of hits you right in the heart,” he said.

Upon returning to Enid, Ingham went into self-isolation for two weeks, staying separated even from his wife and kids, except for his son — who brought him meals while keeping a safe distance. Reflecting on his trip, he was heartened by the warmth and unity of New Yorkers, and also looked forward to getting back to work at St. Mary’s. “The people are so good here,” he said of the community he calls home. “We’re a family.”